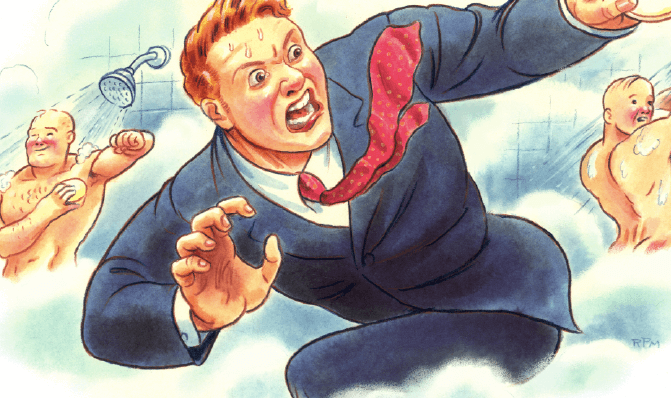 NEW YORK — Gym designers have rid locker rooms of the gnarly shower curtains, trading them in for sexy glass escape pods. They have made bathroom stalls ever more private. Comfy couch corners, Wi-Fi and lockers with built-in locks have gone from swank options to standard issue.
“Everyone wants to get upgraded now,” said Rudy Fabiano, an architect who estimates he has designed about 500 gyms in the last 25 years.
But gyms are still unable to provide the one thing younger men in particular seem to really want: a way for them to shower and change without actually being nude.
Each day, thousands upon thousands of men in locker rooms nationwide struggle to put on their underwear while still covered chastely in shower towels, like horrible breathless arthropods molting into something tender-skinned. They writhe, still moist, into fresh clothes.
“In the last 20 years, maybe 25 years, there’s a huge cultural shift in people that ultimately affects gyms,” said Bryan Dunkelberger, a founding principal of S3 Design, which has worked for clients like Equinox and the Sports Club/ LA.
“Old-timers, guys that are 60-plus, have no problem with a gang shower and whatever,” Dunkelberger said. “The Gen X-ers are a little bit more sensitive to what they’re spending and what they’re expecting. And the millennials, these are the special children. They expect all the amenities. They grew up in families that had YMCA or country club memberships. They expect certain things. Privacy, they expect.”

Gym Buds
Your gym wants you to have gym buds, with whom you buy expensive carb-infested juices on site and with whom you swap tips about trainers and teachers (but with whom you definitely don’t swap spit). And now your gym wants you to feel a little more at ease in that most sensitive space: the men’s locker room.
Showering after gym class in high school became virtually extinct in the ‘90s. And if Manhattan’s high-end gyms weren’t riddled with ab-laden models or Europeans (or both), there would be few heterosexuals under 40 who have spent any naked time with other men.
“It’s funny. They’re more socially open with everything — Facebook, social media — yet more private in their personal space,” said Kevin Kavanaugh, the president of David Barton Gym.

The Urinal Study
Not long after the invention of the idea of personal space in 1959 came a classic ‘70s study gamely titled “Personal Space Invasions in the Lavatory.” In it, researchers spied upon urinals to see how long it took for men to begin emptying their bladders.
It takes, we learned, almost twice as long when there is a man at a urinal next to you, and about half as long as when someone is one urinal away, compared with going it alone.
Closeness breeds anxiety; penis-related closeness can be overwhelming.
“Someone standing next to you at the subway station fully clothed is less close than someone standing next to you naked at a gym,” Dunkelberger said.
“Privacy and space is kind of where it’s at,” Fabiano said.

A Matter of Taste
Gyms, like black holes, resonate at a frequency. There is the chartreuse and violet and space-black thrum of David Barton Gym, and the clean white with candy red accents of New York Sports Club — a red wholly different from the sensual deep red ping of Barry’s Bootcamp. The blistering white and yellow of a SoulCycle burns the hottest.
Our budget-conscious friend Blink Fitness has a funny soft blue that I can’t even hear. Crunch has the palette of those awesome Indian comic books. The wheat and marble of Equinox is like “Mussolini does the Hamptons.”
Dunkelberger believes that women pick a gym based on whether it is clean and safe. Only then do they imagine themselves in the environment. Men choose a gym more abstractly, less sensibly, more ineptly.
Now, more than ever, they choose tastefulness. In almost every high-end locker room there is a wet door, leading to a dank troll cave. This is the steam room. But at the Equinox abutting the High Line, the men’s steam room instead intrudes: It is a glass box that presents itself as a wall dividing the sink area and shower area.
From three sides, fleshy moving colors are visible inside. It is reminiscent of the absurd smoking chamber of Rome’s Fiumicino airport. It is a thirst trap as drawn by Michel Foucault and executed by Olafur Eliasson. It’s great.

Workout and Blowout
The Equinox on East 61st Street, two David Barton locations and the Setai Club on Wall Street have lately partnered with Glam & Go, a blowout bar that starts at $25 for 15-minute dry-hair blowouts.
At the David Barton Gym on Astor Place, Glam & Go was installed inside the women’s locker room. “Our men are saying: ‘Hey, what about me? I can’t go in the ladies room to get it,’” Kavanaugh said. “So we’re talking about how to put it in gender-neutral areas.”
For the conceivable future, the all-gender blowout bar looks to be the only moderately intimate gym location where men and women are likely to mix. For a city now seemingly mostly composed of subsidized young people from posh liberal arts schools who all dormed and often showered together, it’s queer, and a little sad, to see that desires for privacy and gender segregation are still entrenched in design.
“We had an attempt at a coed sauna, thinking it would work well,” Kavanaugh said. “But it didn’t. I was surprised at the amount of puritanical behavior around mixing the sexes. I guess it goes to wanting more privacy.”
“If there was a man in there, women wouldn’t go in,” he said. “If there was a woman in there, men wouldn’t go in. It became very strange. I’m surprised at how less enlightened we are about crossing and mixing genders.” NYT

How to build a more efficient body

Why Daily Weight Lifting Can Be Dangerous