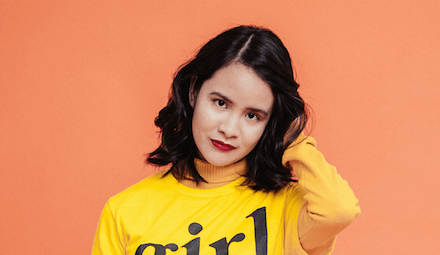 Bally pays homage to the 1930s I am… “Both thrilled and calm. I’ll be writing an art column for The Philippine Star on top of writing for Jewelmer, and I’m thrilled to read the 30 or so books that have been sitting on my non-existent bookshelf for the past two years. I’m also finally going to start working out or do yoga again.”

My first writer crush was… “Edgar Allan Poe. In fifth grade, I thought ‘The Raven’ was very dark, mysterious, and sexy — kidding! But my very first — and still biggest — influence is my dad, who had always wanted to be a writer, but he worked for the government all his life because he thought writing was never a viable career. He helped me write a poem in second grade that began with ‘Wee, wee bumblebee, flying high up a tree.’ It may not be ‘The Raven’ but it still is our masterpiece.”

Print media is. . . “Alive and well, thanks to creatives who modernize the medium and see print as a complement to the digital world rather than something that competes with it. Also, we should be thankful to international indie magazines that showed us the luxury of plenty of white space, fairy subjects, and winding pointless prose we never knew we wanted. When we say ‘print is dead,’ the problem lies in the limited ways we see the platform and not its possibilities. We think of layout templates, of celeb features, of makeup trends, but print can go beyond those if we let it. It can be a platform to discuss culture, arts, politics, and radical notions of beauty and not just fashion statements and cheesy adverts.”

Writer’s block is. . .  “Best solved by thinking that my editor will eat me alive if I don’t meet the deadline.”