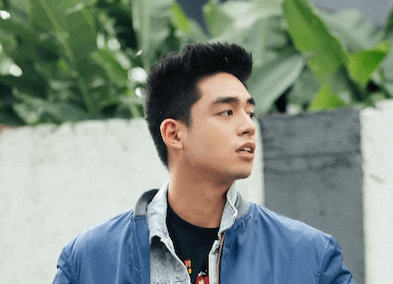 Known for: His covers (especially his version of Kings of Leon’s “Use Somebody”) on The Voice of the Philippines Season 2

I am… “A singer who can play the guitar. I’m Cebuano. In 2011, I was a grand finalist for Pilipinas Got Talent Season 2 but it was really when I joined The Voice as part of Team Lea [Salonga] that things picked up. I am now part of Viva, so I play in City of Dreams, do corporate events, and mall shows.”

My first stage was… “a big can of Nido Milk inside a grocery cart. My mom would make me sit on it while she did the groceries and I would sing the entire time. I would stop whenever I’d see a stranger watching, though. But I was encouraged to love music growing up. My parents are both musically inclined.”

Favorite song: “You and Me” by Lifehouse.

I initially wanted to be… “A doctor, an architect, or an engineer. My dad wanted me to follow in his footsteps and become a businessman. But when I was introduced to music, things changed. My sole purpose for joining Pilipinas Got Talent was to get validation, to be confident with what I love to do as a hobby. The end result changed my life so I thought, why not? Strike while the iron is hot.”

In five years… “I want to be a household name in the showbiz industry. I would probably have my own business too. I want to lead what I call ‘a complicated simple life,’ where I get to do what I want to do while being able to make a living.”

Next in line: Keiko Necesario