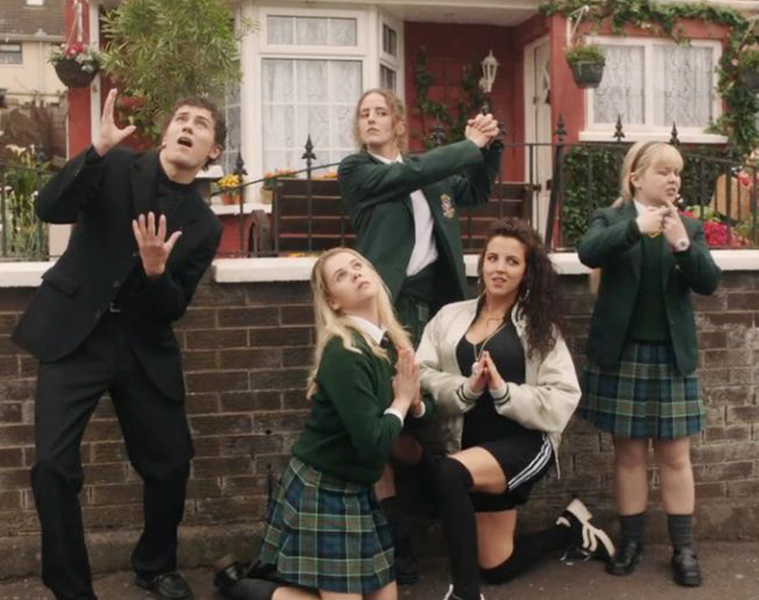 Derry Girls opens its first episode with a voiceover:

“My name is Erin Quinn. I’m 16 years old, and I come from a place called Derry—or Londonderry, depending on your persuasion—a troubled little corner in the northwest of Ireland. It’s fair to say that I have a somewhat complicated relationship with my hometown. You see, the thing about living in Derry is, there’s nowhere to hide. Everybody knows everybody knows everything about everybody, and sometimes, all I really want is to be simply left alone.”

Playing over a montage of green fields, narrow streets, and unremarkable townhouses, this soliloquy could have you thinking that you’re watching a show about a thoughtful (if angsty) teenager trying to navigate a complicated world during a critical time in her life. But you’d be happy to find out you’re wrong, because as it turns out, Derry Girls isn’t a first-person narrative from a pensive and painfully sensitive character; My So-Called Life this is not.

Rather, the opener is an entry from the aforementioned Erin’s diary being read aloud by her 15-year-old cousin Orla, who is making a book report on it—without Erin’s permission, of course. And she’d quote passages from the diary throughout the day to her cousin’s mortification, even during a disciplinary hearing at school.

Derry Girls is a comedy series about a bunch of teenagers from a working class town in Northern Ireland, but what’s refreshing about it compared to the other crop of teenage-centric shows is that it doesn’t dress up adolescence with an unnecessary (not to mention unbelievable) sheen of coolness. No teenager is ever cool, and yet so many of them think they are. Erin and her cohorts—which, aside from her weird and spacey cousin Orla, include the high-strung, goody two-shoes Clare, the cocky Michelle, and Michelle’s English cousin, the frequently picked on James—are no exception. They’re not the popular kids in the all-girls Our Lady Immaculate school, but neither are they the losers. (James was accepted as the sole male student because of the concern that he’d be beaten up immediately at an all-boys’ school.)

Their middling status among fellow teenagers doesn’t affect their confidence, though, in how they move through their world, and they are always concocting the most harebrained schemes, from wiggling out of exams by claiming to be witnesses to a miracle to finding a way to get to Belfast to watch a Take That concert despite their mothers’ disapproval.

Yes, Take That, because Derry Girls is set in the mid-‘90s, and one side-effect of that is a really great soundtrack. Only those who grew up in the ‘90s would know the joy of hearing “Informer” suddenly playing in a TV show in 2019, as well as the poignancy of hearing The Cranberries’ “Dreams” (the fact that Dolores O’Riordan is no longer with us doesn’t help). It’s also hilarious how Derry Girls reminds us how dance crazes were done back then.

Back to how uncool these teenagers are: Viewers who have gotten used to the telegenic, carefully controlled expressions of the teenagers in most current TV shows might get put off at first by how animated the Derry girls’ faces are. Erin, in particular, played by the Derry-born and -raised Saoirse-Monica Jackson, is almost rubber-faced with her reactions, from the way her lips would curl in disgust to how her nostrils flare in indignation or excitement. Jackson’s confidence as an actress to appear “ugly” (and frequently with a double chin) onscreen is refreshing, though ideally it shouldn’t, because people look derpy half the time in real life.

It’s also refreshing to see teenagers that are not so sexualized. Michelle has a foul mouth that frequently spouts juvenile sex talk, but it can’t completely hide her inexperience in actually relating to guys her age. Erin is boy crazy, but her unique mix of self-confidence, self-consciousness, and awkwardness keep getting in the way. Clare is a lesbian, but her romantic prospects are as non-existent as her friends’, which is a nice way of normalizing her sexual orientation. James may be the only English thorn among Irish roses, but he’s no alpha asshole, and it’s a running joke how no one in Derry takes him seriously (people mistaking him for gay got tired quickly, though). As for Orla, she’s too pure and/or out of this world for just any dude, and it’s only fitting that she chose her and Erin’s Granda to be her prom date.

In short, the Derry girls (well, some of them) feel the pull of teenage hormones, but none of them are remotely close to having a sex life.

Violence is a likelier presence. Inspired by show creator and writer Lisa McGee’s teen years, Derry Girls is set during “the Troubles,” a period when the long-term conflict between the English and the Irish manifested itself through sectarian violence, with bombings killing thousands and British soldiers patrolling the streets. They don’t weigh down the show, however, and serve more as a backdrop for quotidian drama. While political events do affect their daily lives, the Derry girls are still self-absorbed teenagers, but in an innocent and touching way.

Season one ends with the adults at home, deeply troubled by news reports of another bombing, while the kids are dancing and doing step aerobics onstage in school in support of Orla and in defiance of the other students’ mockery of her talent show performance. Even with its comedic nature, Derry Girls is adept at juxtaposing these ordinary kids’ ordinary lives with destabilizing political events, thus highlighting the ephemerality of childhood. It’s hard for a viewer not to wish for the Derry girls to stay as childlike as they are for as long as they can, maybe even not to remember that fleeting period a long time ago when life didn’t feel so scary and hard yet.

At around 23 minutes per episode, Derry Girls is a funny and comforting reliever to the edgier, grittier portrayal of teenage life. To those worried about the Irish accent being a hurdle, there are captions to help you out, and a Reddit user has helpfully put together a glossary of Derry Girls terms for every non-Irish’s benefit.

Seasons one and two of Derry Girls are now streaming on Netflix.