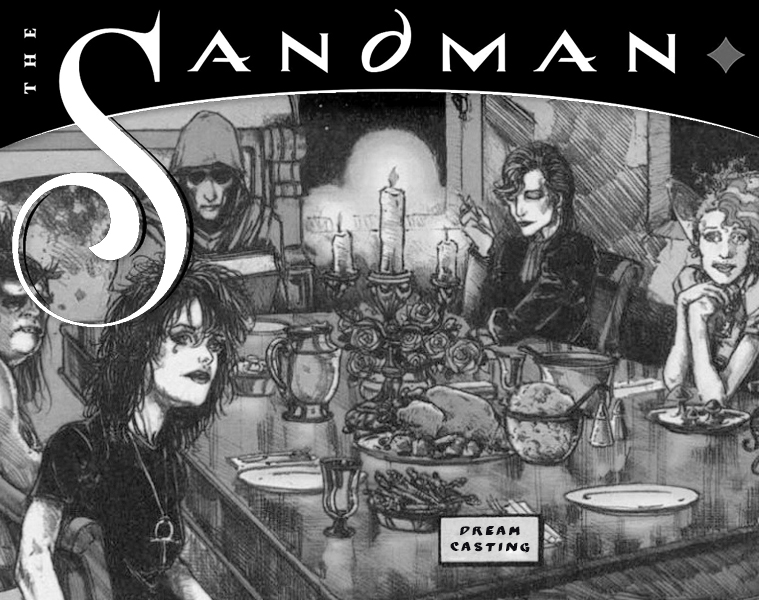 Here’s another “It’s been 84 years…” topic: the page-to-screen adaptation of Neil Gaiman’s The Sandman comics. After languishing in development hell for decades, it was announced early this week that the popular comic series will have its own “10-episode (plus one)” series on Netflix. The media service company describes the series as “a rich blend of modern myth and dark fantasy in which contemporary fiction, historical drama, and legend are seamlessly interwoven[.] The Sandman follows the people and places affected by Morpheus, the Dream King, as he mends the cosmic—and human—mistakes he’s made during his vast existence.”

“We’re thrilled to partner with the brilliant team that is Neil Gaiman, David S. Goyer, and Allan Heinberg to finally bring Neil’s iconic comic book series, The Sandman, to life onscreen,” Channing Dungey, vice-president for Netflix’s Original Series department, said in a statement. “From its rich characters and storylines to its intricately built-out worlds, we’re excited to create an epic original series that dives deep into this multi-layered universe beloved by fans around the world.”

As for Gaiman, though his involvement in the project remains unclear, he has expressed the desire not to see a literal adaptation of his work for television:

I'm hoping we can make something on television that feels as personal and true as the best of the Sandman comics did. Just set thirty years later than Sandman the comic. https://t.co/Wy8y4aDbdE

Given the Sandman‘s fully fleshed out universe, adapting it for the screen would always be a nigh impossible order. Casting alone would need to be a careful process, and there are hundreds of characters populating The Sandman. And that’s why I’m taking my jab at it.

This isn’t dreamcasting the whole slew of characters, though; that would mean re-reading through all 75 issues and listing down everyone who made a significant appearance. As big of a fan as I am of this particular work of Gaiman’s, I’m not its most diligent one. At least, not since college.

I’m going with the most obvious and most important characters: the Endless, the seven siblings who are central to the Sandman universe and are the “embodiments of powerful natural forces.” On a more philosophical line of thought, the Endless are what they do and how they function, and are “a creation of the consciousness of living beings.” No one knows how they came to be, but they have always been there since even before life the way we know it began on Earth. Yet despite their age (a word too small to encompass the extent of their existence) and the power they wield over their respective realms, the siblings are quite the dysfunctional and even immature bunch.

So which actors do I believe could effectively convey the complexity of these beloved and flawed characters? With all the recent Keanu Reeves Renaissance, why not cast him in a role that will let him be the brooding man that he often comes across as? Dream is both the lord and personification of dreams, with dreams including the stories we tell ourselves. Lean to the point of being gaunt, with jet-black hair and often appearing pale (although his skin tone depends on whom he is appearing to) and cloaked in all black, Dream is conscientious about his responsibilities, often to the point of being insensitive and even cruel to others. He is quite the fan favorite, despite his asshole tendencies.

There is yet to be a story told of Reeves being an asshole himself, but he can pull off being mopey and spiteful while remaining dreamy⁠—pun intended⁠—and even without saying a word. Other websites have suggested Tom Hiddleston, which, nope, he’s too earnest and looks too goofy, while a friend of mine raised Jared Leto as a possibility. Okay, sure, but the showrunners should then change the character’s name to A Fucking Nightmare. This one was difficult. Finding someone who can encapsulate Death’s kindness, optimism, and matter-of-fact attitude, despite her reputation among mortals, is a tall order. Plus, she’s my favorite, so no real person could ever compare. And then my friend mentioned Tatiana Maslany (though for a different character), and something clicked. After playing fifty ‘leven clones in the sci-fi series Orphan Black, the Canadian actress has shown a capacity to be likable even when showing the most unlikable behavior, which makes her perfect to play this Endless character.

While death is often presented as a ghastly creature who is only too happy to fetch someone from the land of the living, Death’s personality makes passing away a less scary, even peaceful transition of the soul to another realm, whether the departed is a hundred years old or a newborn, whether they suffered from a long, slow death or a quick and violent one. The point is that the person had lived. “You lived what anybody gets…You got a lifetime. No more. No less. You got a lifetime.” Isn’t that a comforting thought? Death used to be arrogant and icy, but after living as a mortal for one day to experience what it’s like not to live forever, she understood that people simply appreciate having a compassionate companion around when facing the end of their life, and that is who she tries to be. Another awesome Death quote: “I’m not merciful or blessed. I’m just me. I’ve got a job to do and I do it….When the first living thing existed, I was there. Waiting. When the last living thing dies, my job will be finished. I’ll put the chairs on the tables, turn out the lights, and lock the universe behind me when I leave.” This choice might seem a little too on-the-nose because of the physical similarities between Destruction and Chris Hemsworth, but the Thor actor is adept with mixing physicality and comedy, which is important given that Destruction has a pretty great sense of humor.

While he is the only Endless to have abandoned his realm and responsibilities, Destruction actually shows quite the deep capacity for self-reflection and self-awareness. When the Age of Reason ushered in the invention of the atomic bomb, he became unwilling to be responsible for the kind of damage it would wreak. And while destruction did not cease with his abandonment, he also conscientiously did not cause it anymore, focusing instead on creating something—usually mediocre art—rather than destroying it. Nespresso x Helm by Chef Josh Boutwood: a coffee and food pairing like no other

Tilda Swinton seems to be the internet’s unanimous choice for playing Desire, a striking and androgynous figure who can appear as either male or female or both or neither, depending on what a situation or environment calls for. With a tendency to be callous and cruel, operating simply from the force which she embodies, Desire, as the third youngest among the Endless, also tends to interfere with the affairs of its older siblings. This was another head-scratcher of a character to cast, and so I raise my friend’s suggestion: the Academy Award-winning Octavia Spencer. Now, before any claims that this choice is due to some physical basis: a) It was my friend who suggested her, okay?; and b) He reasoned, “Octavia is great at devastation.” I had thought that Kathy Bates would also be great as Despair, but especially after that second point, I am now behind this casting choice. As Desire’s twin, Despair can cast her own sullen seductive spell, and had once even challenged her older brother Dream to see who between them could win over a failed businessman. (spoiler alert: Dream won.) Given Spencer’s performance in the horror film Ma, she can expertly layer cunning charm with despair to present the full complexity of this character. The youngest Endless has a palpable fragility beneath her Manic Pixie Dream Girl surface. Delirium used to be Delight, and the reason behind the transformation remains unknown, even by her eldest sibling Destiny. Scatterbrained, offbeat, easily distracted, and maybe a little mad, she isn’t always taken seriously by the others, even though she has expressed profound insights on more than a few occasions. I choose Ellen Page for her, not only because the actress can pull off a child-like look but also because people will believe the wistfulness behind her innocence, at least as the current-day Delirium. This one is a bit of a cop-out, since Destiny has almost zero personality beneath that roomy hooded robe. As the eldest sibling, he is regarded as the wisest among them, and is chained to a book that tells the story of everyone and everything in existence. Destiny’s duty is to read the book’s contents and observe what is happening, and he rarely interferes with what he is observing. He is also blind. Like Dream, Destiny is unflagging about his responsibilities, but unlike his brother, he believes in a hands-off approach when it comes to mortals. This is also why he can come off as a stoic bore. Sir Ian McKellen can keep this character from being a total snooze-fest, though, with the necessary gravitas that only he can bring.