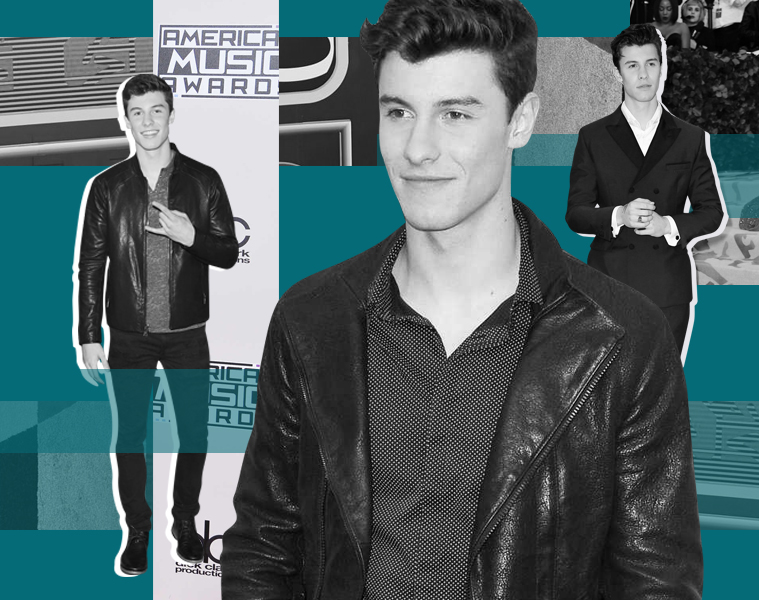 Before “Lost In Japan,” Shawn Mendes generally elicited a “Who?” from me. But since dropping two tracks from his latest album Shawn Mendes: The Album (to be released on May 25), I’ve been getting more curious about this Vine-born and -weaned sensation. If you haven’t listened to it yet—which I highly doubt—here’s Mendes’ track that has gotten me in an existential quagmire. (“Am I garbage for liking this Timberlake derivative-sounding bop?!”):

But it’s so good, ugh, especially when paired with the choreography that Jake Kodish made for it:

Anyway, with Mendes now on my pop culture radar, let’s take a look at how the social media star is navigating a more mainstream stardom, style-wise.

A couple of years ago, the Canadian artist attended his home country’s version of the Grammys, and to be honest, his outfit wasn’t anything special.

He didn’t fare better at the American Music Awards that same year, either, unless the look he was going for was Generic White Boy, which, sure.

Are those…frosted tips? In 2015 (at the iHeartRadio Music Awards)?! I don’t even know anymore. Aren’t Gen Z kids supposed to be a bit more savvy than their elders?

Ugh, so his signature accessory is that weird hand gesture. I do like the jacket he wore to the following year’s iHeartRadio awards show, but that’s it. Maybe my recent Mendes curiosity was a bad idea.

Okay, now we’re talking! From looking like any other acoustic covers-doing rando with a YouTube account, Mendes finally looked like the Next Biggest Popstar at the 2016 Billboard Music Awards in this all-black ensemble. Props for those lapels that have me wondering if they were part of his suit jacket or were from a close-necked vest underneath.

After seeing him able to clean up for the red carpet in 2016, Mendes seemed to have paced his style evolution that year, keeping the tailored trousers and the loafers around at the American Music Awards, but switching it up at the top with what looked like a textured dark green leather jacket (it photographed as black under different lighting). Wish he had that jacket’s length extended a bit, though.

This time, his jacket matched the trousers, and while that print on that shirt leaves a lot to be desired, this getup makes him look as if he rightfully belonged on the (black) carpet. I mean, sure, it was the 2017 MTV Music Video Awards carpet (is it still relevant?), but let’s not split hairs here.

Shawn, I am as uninspired as you are by this regression. Those too-tight pants, that brocade-looking jacket that looks added on at the last minute, the blah-ness of the black-on-black scheme underneath…the 2017 American Music Awards wasn’t just your night.

Nice to see you smiling at the 2017 MTV Europe Music Awards, but Shawn, you do know there’s a difference between people laughing with you and people laughing at you, right? What was that monstrosity of a patterned suit you had on, which was somehow matte and shiny at the same time?!

Tod’s gets supersized dots for collaboration with Hender Scheme

Now this is a pattern-and-texture play I can get behind: Mendes cutting a dashing figure at this year’s pre-Grammy red carpet.

So this is a different style direction that he took at the recent Echo Music Awards, but I appreciate it. From the knees up, Mendes looked great, and the coolness of the khaki and the feldgrau flattered his skin tone. That pant length, though, I’m on the fence about it.

You know Mendes is a certified big deal when he walked the Met Gala 2018 red carpet, and made an even bigger buzz by having Hailey Baldwin on his arm. But his dating life and sexual orientation a) are none of my business; and b) don’t interest me in the least, so let’s talk about the purple Tommy Hilfiger suit he had on instead. While far from falling within the event’s theme of “Heavenly Bodies: Fashion and the Catholic Imagination,” it wasn’t a bad look on its own. Here’s to hoping Mendes owns his ever-growing fame and keeps dressing like a certified star.

Something for Hump Day: Guess which Hollywood actor sang “Tomorrow” in a Korean game show with a unicorn mask on