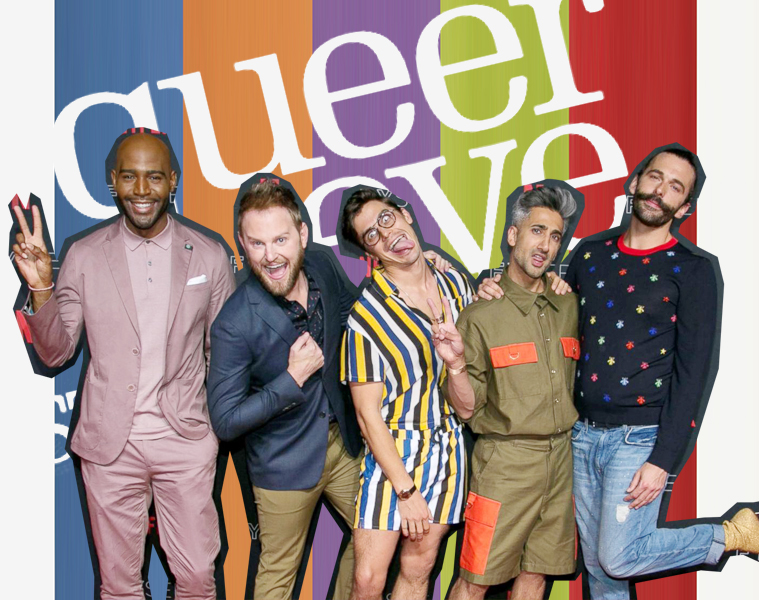 I don’t know about you, but season three of Queer Eye made its arrival at a time when I really needed it. The show has been on everyone’s must-see feel-good TV list since its 2018 revival, and watching it has become essential in my self-care/self-soothe practice. I mean, who doesn’t feel uplifted watching someone get the loving and supportive push they need to get out of a rut?

And true to its tagline, Queer Eye keeps getting better with a season three that delivers. Let me tell you why.

Antoni rarely cooks this season
QE food and wine expert Antoni’s kitchen prowess has been the subject of an ongoing discussion/joke since season one. To be fair, he never claimed to be a chef chef; he mainly describes himself as a restaurateur, and based on what he does on the show, he does know his way around the kitchen. Whenever people would point out how Antoni keeps on teaching really simple recipes to the QE heroes, they seem to miss the point that for a lot of these people, they’re starting from having a daily diet of microwaved processed food; mashing avocados to make guacamole is already a big leap for them, but one that’s manageable enough. To quote Antoni’s 2018 interview with GQ: “It’s not a cooking show. It’s not about my skill set. It’s about figuring out how we can contribute to the lives of these people in a very short amount of time…If you just have these people start thinking differently about the food, I think then I’m happy with that.”

For the show’s third season, his basic cooking goes beyond basic. In fact, with a number of the heroes already proficient in the kitchen—and two of them are some of the best barbecue pitmasters in Kansas, Missouri—he barely breaks out the pots and the pans. What he does, instead, is help people discover a different layer to their relationship with food. A self-sufficient woman who’s not used to getting herself pampered? A special meal at a restaurant! Two sisters who make the meanest barbecue sauce but are too overwhelmed to turn their secret recipe into a profitable business? A meeting with a chef and a food scientist at a bottling company! (And now, the Jones Bar-B-Q sauce is a fast-selling bestseller.) A baking session with an expectant father and his precocious stepdaughter turns into bonding time, and a former alcoholic makes up for lost time with his son by reliving his love for food. Antoni’s contributions may not be as visually amazing as Jonathan’s or Tan’s or Bobby’s, but they help the recipients step into a new, more “elevated” phase of their lives with ease and certainty.

Oh, and Antoni fans, if you click on the image below, there’s a pay-off waiting for you 😉

Bobby remains the hardest-working yet most underrated queen
No one can beat Jonathan in the flamboyance and theatrics department, and who doesn’t want to receive an “I’m obsessed with how gorgeous you are!” from him? Bobby, though. Bobby. I think people sleep on him. Sure, his taste of home tchotchkes and accessories might not be to everyone’s taste, but his renovations are consistently amazing and continue to be one of the best reveals in every episode, even though viewers get to see only snippets of the whole renovation and redesign process. That’s a ton of hard work condensed into a couple minutes of airtime. Bobby has been my personal fave since season one, and yet he keeps exceeding my expectations with each succeeding season because of how he does a lot more than just redesigning a space.

Given that he was adopted when he was a kid, Bobby seems to take it upon himself to connect personally with every hero with a similar back story and reassure them that things will get better, with his own life experiences as examples. I’m talking about episode five, specifically, which features a young black lesbian who feels like an outsider within the typical societal definition of family; needless to say, watching this requires having a box of tissues on hand. Quite the private person, Bobby’s little revelations about his past make me admire more what he has achieved in his life, and his lessons on how to create a home for one’s self, even with just the little things, are stuff that every adult needs to hear.

We all need Karamo to be our life coach
It’s hard to cram important life lessons into a 49-minute episode, yet Karamo somehow does it. And in season three, he shines best as a culture expert who really wants each hero to step into the best versions of themselves, not just on the outside but also on the inside, through small but powerful exercises that require them to dig deep. In any other typical makeover show, the “Love yourself” platitude can get a little tiring, but Karamo’s sincerity and sensitivity keep his tough love sessions from getting hokey. In fact, I might have to borrow a particular mirror exercise that he used in episode four to help me fight my self-deprecating tendencies. A warning, though: That exercise can feel too real for a lot of people.

The Fab Five reminds us that it’s okay to ask for help
This is the over-arching theme of QE3: That admitting you need help and actually accepting help are not signs of weakness.

This season’s heroes have been overwhelmed and stretched thin by work and personal responsibilities, and issues arising from past trauma, whether it’s the death of a partner or an abusive experience, definitely didn’t help. At the core, though, they’re all trying their best even as they struggle.

But sometimes, our best isn’t quite enough, especially when our own cups are far from full. That’s when asking for help and being receptive to others’ assistance become a sign of maturity and growth. To quote Antoni, “There’s, like, an emotional intelligence in being able to be, like, ‘You know what? I don’t have this all on my own, and I can’t figure it out, and I need your help with this.'”

QE doesn’t just talk the talk, it walks the walk too: In the first episode, instead of prescribing his ideas on what femininity is, Karamo had their self-described tomboy heroine meet a diverse group of women for an empowering conversation on what being a woman means. He handed over the reins to the people who know better than he does, something we all need to do more.

Laughing then crying make for great therapy
“Squirrel“: Is it pronounced as “skwhorl” or “skwir-rel”? Is tomato a fruit or a vegetable? (I say fruit.) Fashion guru Tan seems to find himself in the middle of raging hot debates this season, but to the question “Is he hot or not in a camo negligee?” the answer, hands down, is yes. I’ve already mentioned how Bobby outdoes himself this season, but who knew a simple engraving could reduce me to a puddle of tears? Watch episode six to get what I mean. Who doesn’t support Jonathan’s agenda of getting all men aboard the self-care train via skincare? And truly, the heroes prove to be good students, though a couple of them might need some remedial lessons on how not to confuse a facial moisturizer with a body cream.

Perhaps one of the most touching moments in QE3, which is a season that’s overflowing with touching moments, is the one where a heroine gets some dental work done and sees her smile in the mirror for the first time in decades. It’s a perfect example of how something so simple (albeit expensive) can be so transformative in someone’s life—kinda like how this show is.

WATCH: Netflix’s new titles coming every week including ‘Knives Out 2’ and ‘The Gray Man’