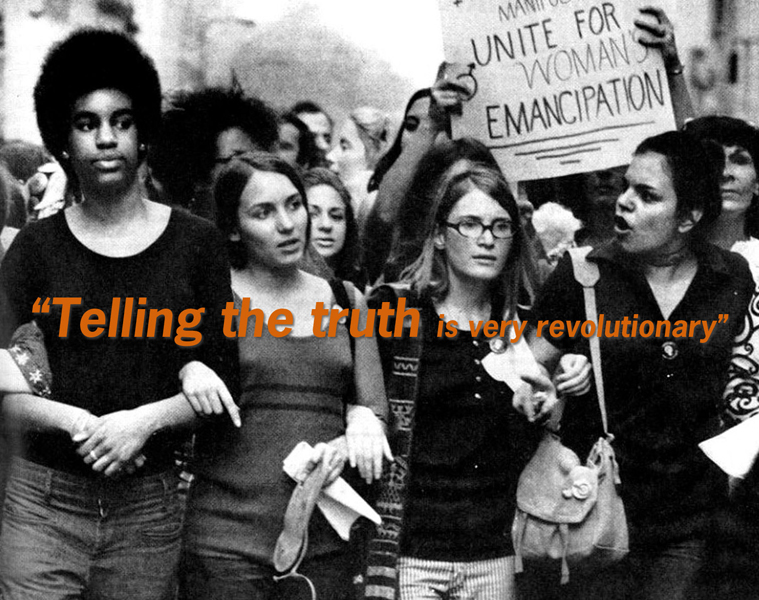 If it were up to me, it’d be Women’s History Month every month, because so much of what women have contributed throughout history to culture and civilization remain downplayed, if not outright erased, and we still haven’t caught up with the backlog of recognizing this omission. As historian and feminist Gerda Lerner had stated:

“I’ve been working for 30 years in the field of Women’s History and the fact is that women do have a history, that they have participated in making history, but that we have not until very recently recognized that. And that has created enormous problems for society as a whole, for both men and women. I think the problems are that it has given women a totally wrong impression of their connection to the work of the world. And that is one of the worse effects of this omission, that women have no heroines…

“The effect on men has been very bad, too, of the omission of women’s history, because men have been given the impression that they’re much more important in the world than they actually are, and that’s not a good way to become a human being. It has fostered illusions of grandeur in every man that are unwarranted. If you can think, as a man, that everything great in the world and in civilization was created by men, then naturally you have to look down on women and naturally, you have to have different aspirations for your sons than for your daughters, and I don’t think that’s good for men, either.”

So four days into Women’s History Month, and International Women’s Day just a few days away, here are a few suggestions on how we can rectify this collective error and start giving women their due. Revisionism and revisionism via osmosis are afflictions among us Filipinos, so it’s not a stretch to assume that not a lot of us know about the Balangiga massacre, which happened during the Philippine-American War. In 1901, in retaliation to the killing of 48 members of the US 9th Infantry by guerrillas and the townspeople of Balangiga, American soldiers burned down whole towns across Samar; Brigadier General Jacob H. Smith, who wanted “[the] interior of Samar [to] be made a howling wilderness,” also ordered that all residents above 10 years of age be killed. The number of Filipino casualties remain disputed, with figures ranging from 2,500 to 50,000.

A lot less of us would also probably know about the lone female hero of that historical event. On Saturday, award-winning journalist Jeff Canoy presents a lecture on this unsung figure of courage through Ayala Museum’s History Talks | Diorama Series. To reserve a seat at the lecture, visit the Ayala Museum registration site.

Women in History: The Unsung Hero of Balangiga lecture will be held on March 9, Saturday, from 3:00 to 4:30 p.m. Rates are Php350 for regular visitors, Php280 for museum members, Php 250 for senior citizens, and Php175 for undergraduate students and teachers.

We stand on the shoulders of giants. So much of what we enjoy today (and don’t give much thought to) come from the hard-won victories that generations of women before us had fought. The 2014 documentary She’s Beautiful When She’s Angry (available for streaming on Netflix) serves as a great reminder of their lengthy fight—and of the vigilance required to maintain these victories well into the future. Produced and directed by Mary Dore, Beautiful combines interviews with women activists (granted, majority of them are white) with archival clips and the rare reenactment to provide a compact view of how the second wave of feminism unfolded from 1966 to 1971, and how the effects of the groundwork that these courageous women had laid down still benefit us today. It delves into the dynamic nature of consciousness-raising and activism, and raises criticism against feminism, not just from the side of the threatened men and the self-hating women but also from those who were working within the movement and found its mainstream image too white, too rich, too straight. Beautiful also brings up some FAQs that feminists today still face, and gives us, modern-day audiences, the kind of mic drop answers that any Twitter celeb would be proud to post.

TV host David Frost: You’re so oversensitive. Why are you so sensitive?

Activisit Shulamith Firestone: We don’t like being sensitive, it’s not pleasant. We don’t like having to always be catching things. We’d rather they didn’t exist. But as long as people are going to be insensitive to our position, we’re gonna have to keep correcting them because there’s no other way to change the consciousness.

The documentary is celebratory in spirit, even with the concern and anger that the activists express about how the women’s liberation movement is in grave danger of being undone today, just less than half a century later. It drives home the point that anger is a necessary fuel for getting things done. And when harnessed for the greater good, this emotion, which is seen as “unbecoming” and unnatural for ladies, make her beautiful.

Man in an audience: I would like to ask Germaine Greer, I really don’t know what women are asking for. Now, suppose I wanted to give it to them—

Feminist Germaine Greer: Listen, you may as well relax, because whatever it is they’re asking for, honey, it’s not for you. Sci-fi fanboys may be noisy online, but that doesn’t make the genre the territory of solely men. Women are co-creators and shapers of this vast universe of nerds, both as proponents and consumers of the genre. The limited series podcast Forgotten Women of Genre, presented by SYFY Wire Fangrrls, shines a light on the female figures who have helped enrich science fiction and fantasy, and whose work remain unrecognized. For every day of March, there’s a new episode focusing on a different woman, making that 31 remarkable women for every nerd worth their salt to get to know.