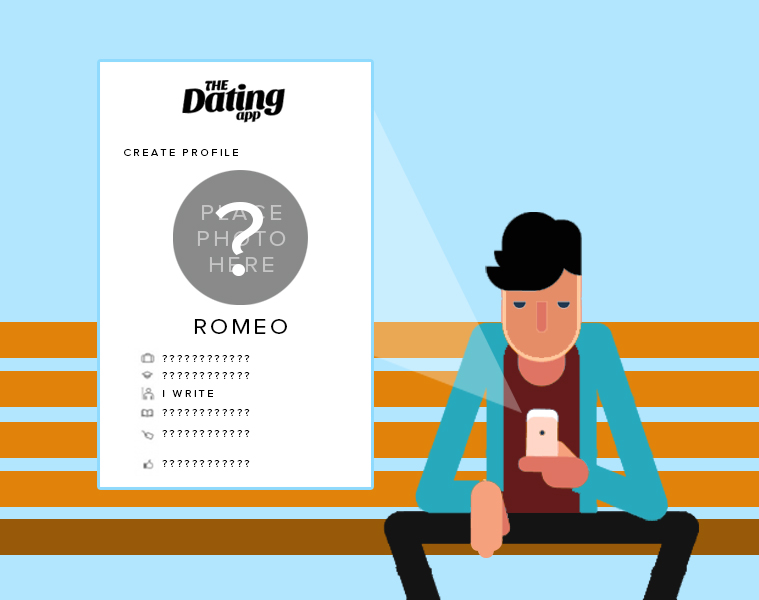 Welcome to The Playbook, Garage’s relationship column for the thoughtful and introspective man by Romeo Moran. Here, he unpacks—or at least, tries to—the vagaries and messes of romantic connections. Be forewarned, though: this ain’t no place for bro-downs.

Once upon a time, my girlfriend and I agreed that it was okay for both of us to get on Tinder, just because: 1) it was a fun way to kill time and maybe make new friends; and 2) we were trying out an open relationship.

It’s no secret that online dating is tough, but not for the reasons I had expected. While much is made about how you might never really find an organic (hell, even real) connection browsing through the cold light of your computer or smartphone screen, the real agonizing part about online dating is crafting a virtual persona that others would find worthy of taking a plunge for.

Our reasons aside, I felt my girlfriend had it easier than I did on the swipe fiesta. All she had to do was post her best selfies and construct a bio that wasn’t corny; I believe she wrote, “looking for a French teacher” and “would go on dates for free food,” because she’s clever like that. And I’m sure most of the dudes she swiped right on would swipe right back—which they did. She’s beautiful, why wouldn’t they?

Meanwhile, all I put in my bio, other than my most decent photos—few and far between, because I’m not so photogenic—was, “I write.” That’s it. Nothing about what I liked, what I didn’t like, what I was looking for, what I was avoiding. Just “I write.”

A little pretentious, I’ll admit, but my thinking was, a full laundry list of things about me would have been boring, clichéd, and overeager to the point of corniness. I thought I’d much rather serve some mystery.

I had believed that the intent of a dating app, or at least one with mechanics like Tinder, was to be interesting enough to get a rightward swipe, and for all users to embark on a quest to know more about the person that interested them. To play our full hand, studs, duds, and all, may work depending on exactly what our cards are.

A full laundry list of things about me would have been boring, clichéd, and overeager to the point of corniness. I thought I’d much rather serve some mystery.

And a lot of times, people don’t know they were dealt terrible cards. For those that do know, though, they’ve long realized they have to pretend as if they had good draws—or at least to make their hand look better than it really was.

This is true especially for guys, who seem more likely to look more average, and do actually swipe right on most girls a lot more than girls do on guys. We know girls are into more than just our looks, if the number of, uh, mismatched couples out there are any indication. So we know we have to do better at first impressions if we want women to keep talking to us.

I checked with my girlfriend and her friends, and their top two traits for dating app interactions are, surprise, surprise: guys gotta be funny and intellectual. That means, at its most basic, a guy must not take himself too seriously, and he has to engage the lady’s sensibilities.

Of course, there’s an extreme on the opposite side: forcing humor that just doesn’t work (worse, if you actually don’t know you’re unfunny and you’re trying to pass yourself off as hilarious), and being pretentious as f*ck.

It takes a healthy degree of self-awareness to find where the fine line is, and sometimes, well, you can’t blame a guy for trying a little too hard.

I’d love to say being ourselves would be enough. That would be the dream for everyone. And the reality is nobody’s asking us to be the perfect man, though most times, we find this out only after getting matched with someone who’s just as into us. But I can understand why it sure seems that way, especially for those who haven’t had much luck in relationships. If you’re not all that interesting, you’ve got to find a way to be.

It’s just the new standard for courtship. The act of putting our best foot forward has now been digitized, and while it may seem easier than proving one’s love in multiple chaperoned dates, guys now have got to be savvy enough to market themselves successfully. Because really, what’s changed?

It doesn’t help that pop culture reinforces a mindset that one has to be a certain way to be likable or dateable, regardless of whether you’re a guy or a girl. (Trust me, I’ve had enough of those internal conversations after episodes of shows like How I Met Your Mother.)

“The reality is nobody’s asking us to be the perfect man, though most times, we find this out only after getting matched with someone who’s just as into us.”

So I got right-swiped back because, hey, I guess it turns out that “I write” was enough of a glimpse into who I am. Maybe it was a little lazy, especially because it takes a lot of effort and creativity to figure out how to write a longer, more open, and honest bio that was honest-to-God interesting. But if another person can appreciate that brevity and mystery, then why not? If the gameplan works, then I’m stickin’ to it.

This week’s agenda: Floating with the energy of the full moon lunar eclipse

This week’s agenda: A balancing act under the Full Moon in Libra

8 Stylish Cities For Your New Restaurant

This week’s agenda: Working towards the endgame with Venus and Saturn in sextile