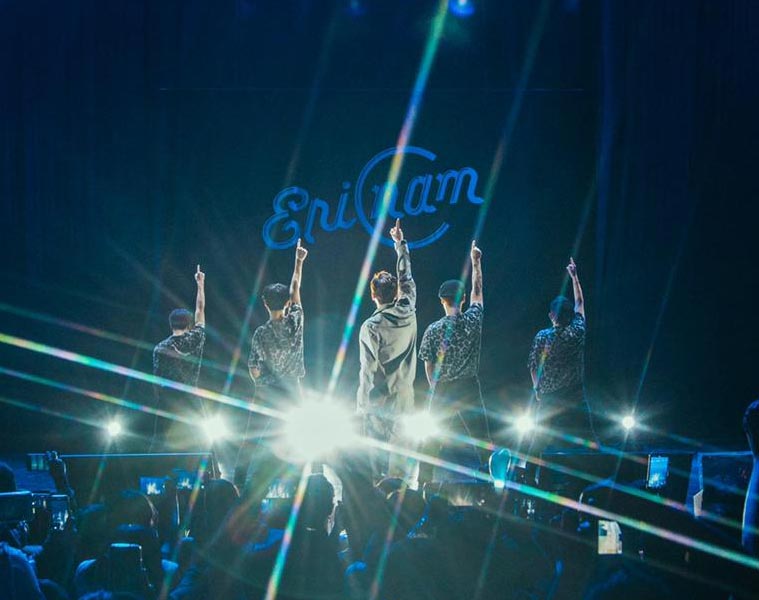 Eric Namʻs logo is marked by a huge letter C that calls attention to itself. Perhaps this is something to mind considering that the initial career path he had taken brought him to Korea, where his family comes from. The pronunciation of the big letter K is retained in Eric’s use of C, but it goes beyond it in visual appearance. Similarly, Nam’s songs take us through fun and favorite pop music tricks, and yet he dwells in unusual, liminal places that make us think and, perhaps, take us elsewhere. Namʻs songs are typical of the popular tunes of the times, driven by chord pattern repetitions and strong rhythms. Nam is equipped with the skills associated with balladeers and RnB artists, capably rendering lyric passages and skipping through runs with ease. What distinguishes him is the combination of what are too conveniently called elements from the West and East. This is something important to consider, given the album that Nam is promoting via touring in Asia, “Before We Begin,” is an all-English album.

Seeing him live at the New Frontier Theater in Cubao, QC gave me a front-seat opportunity to see the cool space that Nam takes in the music world. He styles himself in a way that might be associated with K-Pop stars (flawless skin, wavy hair, polo shirt and fitted pants come to mind), and yet the statement shirt and joggers might be connected with other music stars from the United States. He makes use of what may look good from different sources; in the middle of things, he dances and occasionally jumps his way through.

His songs seem to dwell in these liminal spaces too, as much as he throws out finger hearts that takes out from the inner spaces of his polo shirt, much to the thrill of the audience. One song in the new album, “Congratulations” seems to indicate a concern for queer issues. Nam interacts often, and with joy, with the other vocalist, Marc E Bassey, in the video, possibly making one wonder whether the breakup (something that, Nam proposes, can be a happy thing), happened between two male figures. On the other hand, the song “Wonder” is clearly about a person regretting not having been a more compassionate lover to a person who had issues with depression and sobriety. Hip and fun music alongside clothing both innovative and relaxed, which are all possibly characteristics of the Gen Z, are offered by Eric Nam in “Before We Begin,” which may just be his way of expanding his range – from being a star in South Korea to being a more cosmopolitan artist, something that is more aligned with his Korean-American status. This Boston College-educated musician featured in a well-renowned business magazine that upped his up-and-coming status might really be at the cusp of breaking through, dwelling in spaces and possibilities not given enough consideration. Can down perm be the next hairstyle trend? Here’s what you need to know