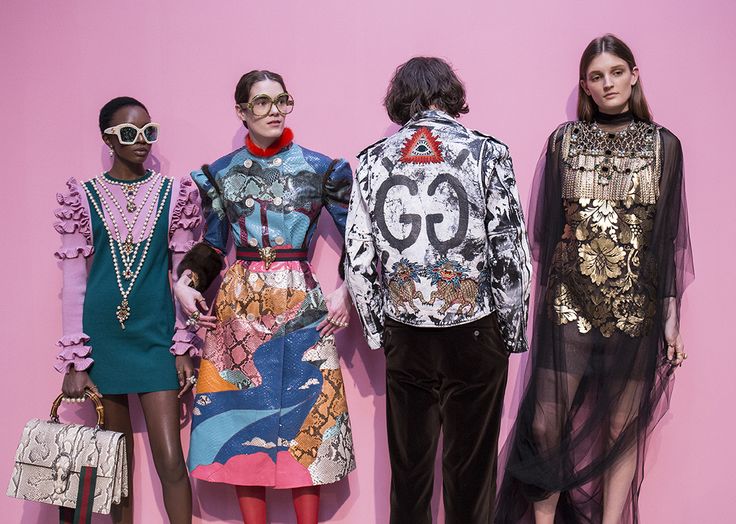 The move toward gender-fluid fashion shows is getting a big-name boost — from Gucci.

Last year at The New York Times International Luxury conference in Versailles, France, Marco Bizzarri, chief executive of the brand, called for an end to separation of the sexes, or at least to their collections.

From 2017, he said, the anchor brand of the Kering group will no longer hold different shows for menswear and womenswear, but will combine the two into a single show, to be held each season.

“Moving to one show each season will significantly help to simplify many aspects of our business,” Bizzarri said. “Maintaining two separate, disconnected calendars has been a result of tradition rather than practicality.”

Menswear shows and sales to wholesalers are now held in January and July, and the women’s in September/October and February/March. Both are held in Milan.

The move follows similar announcements from Burberry (which will combine its men’s and women’s shows starting in September), Tom Ford (ditto) and the French brand Vetements (which will have a joint show in January 2017), all geared to close what brands say is a growing, and costly, gap between modern consumer expectations and the traditional fashion system.

But unlike those brands, which have said that they will also immediately sell the clothes they show — or, in Vetements’ case, nearly immediately — Gucci does not plan to change its production calendar. It will show clothes that will be available six months later. Call it “show everything now, sell later.” It’s more radical than it sounds, because of Gucci’s size (it reported revenue of 3.9 billion euros, or $4.4 billion, in 2015, and has 525 wholly owned stores around the world) and its position as a trend leader.

“It is really being looked to as a trailblazer in the industry,” said Julie Gilhart, a consultant and the former fashion director of Barneys New York. “That makes this move potentially the most disruptive change yet.”

On its face, unifying menswear and womenswear makes sense, and not just because most consumers think of them as one category — “clothes.” Combining collections creates obvious efficiencies, most clearly in the cost of a show, which can reach 1 million euros.

And menswear and womenswear are getting ever closer together, with Louis Vuitton putting Jaden Smith in its womenswear ad campaign in womenswear, unisex clothing on the rise, and the creative director of Gucci, Alessandro Michele, often including men in his women’s show and vice versa. So combining the two underscores the message of a single brand aesthetic across genders.

“It will give me the chance to move towards a different kind of approach to my storytelling,” Michele said in a statement.
But there is an institutional and municipal argument against combining the men’s and women’s weeks. Every fashion week city profits significantly from playing host to the collections. Each season brings floods of buyers, critics and support staff into each city, with a financial boon for related industries. According to a 2012 analysis by the New York City Economic Development Corp., womenswear weeks there alone have a “total economic impact per year of $887 million.”

No wonder that, in July 2015, New York Fashion Week: Men’s was introduced, following London Collections Men, which made its debut in 2012. (Previously, menswear had its own official weeks only in Milan and Paris, along with the Pitti Uomo trade show in Florence.) The first New York men’s week brought 3,000 people to the city.

It is not yet confirmed exactly when the joint Gucci show will be, but given that menswear now accounts for 35 percent of Gucci sales while womenswear represents 65 percent, odds are the combined show will occur during the women’s season.

If so, the absence of a brand like Gucci from Milan men’s week could leave a gaping hole in the schedule for many buyers, and, along with the Internet’s ease of access to shows, may create a convincing argument for some buyers and critics not to attend — or at least it may reduce the number who do.

Bizzarri said Gucci was working closely with the Camera Nazionale della Moda Italiana, the governing body of Milan Fashion Week, but nothing had been decided yet.

According to Carlo Capasa, president of the Camera della Moda, “Given that the calendar situation is always evolving, it is hard to predict if there will be any negative effects.” The important thing, he said, is that the Italians “show powerful vitality as a whole” — perhaps (it is possible to imagine) by being the first to shift to a new system.

One striking thing about Gucci’s announcement is how many unresolved questions there are about the logistics.

Would the house, for example, invite men’s and women’s critics to the same show in September? Bizzarri said he did not know yet.

What would it mean for multibrand boutiques and department stores sending menswear buyers to shows in July? Would they send them again in September? “I don’t know,” Bizzarri said with a laugh, though given that 82 percent of Gucci’s 2015 sales were in their own stores — and that ready-to-wear accounts for only 11 percent of its sales — perhaps it does not matter.

Still, despite all the uncertainty, he said the decision was easy to make. “It just seemed obvious,” he said. “It’s clear something needs to change. Why not start with this?”

It remains to be seen whether other Kering brands like Bottega Veneta, Yves Saint Laurent and Alexander McQueen, all of which show on both the men’s and women’s schedules, will follow suit. Right now, the group is treating Gucci as a test case, which may only add to the general confusion.

“It would be one thing if it all changed at once,” Gilhart said. “But everyone’s going off in different directions. It’s like the wild, wild West.” NYT